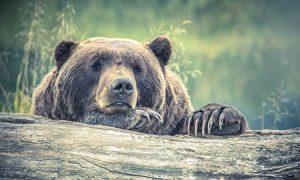 The big news this week is that scientists can accurately track whales using images from satellites 300 odd miles above the surface of the sea. This is great news for people who like to track whales, but it didn’t go down well with Rob, the aforementioned James Acaster fan. “So we’ve got CCTV cameras that can’t give a clear picture of someone robbing a cashpoint five yards away but they can identify a whale from Space!”

He’s got a point. I’m making a list of Rob’s bugbears. Without giving away too much of his personal data, here’s a taste: cooked fruit, hairless animals, nuts, more than one country singer singing at a time… and now whales from Space.

While Rob was ranting about whales, I was looking up the word ‘problem’. I had a hunch there might be a connection. It’s fantastic what you discover when you pursue such hunches armed with an inquisitive mind, an internet and only a small amount of knowledge. Susie Dent’s missing out. Lo and behold, it turns out ‘problem’ comes from the Latin ‘proballein’ – pro (forward) and ballein (throw) – so something that is thrown out there (like a maths problem) or projecting (like a barrier). No mention of whales so far. But wait.

I thought that ‘ballein’ word looked a bit like ‘baleen’, as in whales, and I sensed this had to be more than coincidence. After all, if you had to throw a whale, that would pose something of a problem, wouldn’t it? As I investigated further I found, as I often do, that I was absolutely wrong.

So I returned to ‘problem’, because my friend Andrew had requested it for Word of the Week. More specifically, he had requested the expression “No problem”. Andrew likes to break the rules and he hates the term “No problem”. It’s a personal bugbear of his. So, not being one to let an obvious joke fall by the wayside, I said, “Sure, Andrew. No problem.”

What I meant was, “I can’t do that because we haven’t yet arrived at the day when ‘noproblem’ is written as one word, but I’ll do bugbear instead.” And boy am I glad I did!

How would you define a bugbear? Something annoying, right? Something that bugs you. But originally, in the late 1500s, it meant something much more terrifying than that. The ‘bug’ bit is believed to come from the same root as ‘bogey’, as in the ‘bogeyman’, ‘bogeys at 6 o’clock’ (enemy aircraft), the golfer’s nightmare, a shot over par, and the little green monsters that live up your bugle.

That root was ‘bugge’, a Middle English word meaning something demonic (nothing to do with ‘bugger’, by the way, which comes from a medieval attitude to Bulgarians. Or bugle, which comes from the latin for a young ox). Bugge may have derived from ‘bucca’, the old word for a goat, an animal that, possibly unfairly, has long been associated with the Devil. Back in the 1300s, whenever things went spookily awry, they knew who to blame. Not the sunshine, not the moonlight, certainly not the good times, they blamed it on the bugge.

So a ‘bug’ was originally something really fearsome. Put it together with ‘bear’ and you get a really fearsome, ferocious, flesh-eating beast. Like a bear.

‘Bug’ softened to mean a little insect in the 1620s, when a number of them colonised Charles I’s wig. And as it dawned on people that fearsome, spectral bears were not roaming the British countryside eating naughty children who didn’t wash behind their ears, and hadn’t been for at least a thousand years, you can see how ‘bugbear’ began to lose its terrifying mystique.

My personal bugbear is wasting time (ahahaha, stop laughing). However, my optimistic exploration into problems and whales wasn’t entirely wasted. Something did come up, which you might want to try as a conversation starter at whatever social events you’re gracing this weekend.

Get this. ‘Baleen’ comes from the Latin ‘ballaena’, which comes from the Greek ‘phallaina’, which is a feminine form of ‘phallos’, which means – and I’m sorry if this strikes you as a gratuitous return to the theme of last week’s word, but I’ve come this far so I might as well say it – a swollen penis. Yep. Apparently that’s what the Greeks thought whales looked like. Hell of a swelling!

Unless they were looking from Space.