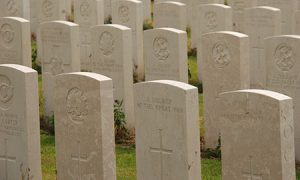 Such is the absurdity of war that although the 1918 Armistice was signed and sealed by half past five in the morning, the guns kept firing until they were officially told to stop at 11am. The number of casualties on all sides in that final five-and-a-half-hour flurry is estimated at 11,000. What is it about 11s?

Having been instigated on Remembrance Day in 1919, the two minutes silence was observed every November 11th until 1939, when, irony of ironies, it was moved to the nearest Sunday to avoid interfering with the war effort. Argument raged too over whose idea it was to commemorate the victims of World War I with two minutes of silence. Some people never learn. The beauty of it is that for two minutes every November, the argument has to stop.

Silence is golden – a truth we have known ever since we first worked out that the hunters who couldn’t shut their gob tended to be the ones who felt the sharp end of the sabre tooth first. But the value of silence goes way beyond self-preservation.

Silent contemplation can yield the most shout-worthy ideas. Was Archimedes singing in the bath when he had his eureka moment? No, he was deep in silent thought about buoyancy and the displacement of fluids. Was Isaac Newton listening to Motorhead when the apple fell on his head? Course he wasn’t.

From Buddha to Barry Davies, the observance of silence has repeatedly proven to be the most direct route to enlightenment, whether you’re learning the Four Noble Truths or that Man City have gone 4-0 down. And it’s not just humans who understand this. My cats are fond of reminding me of the old saying, “It’s better to remain silent and be thought a fool than to bark and remove all doubt,” an aphorism later humanised and attributed to Abraham Lincoln. Or was it Mark Twain? Who cares? They were both too smart to argue over it.

My big silence-related discovery this week was that Trappist monks don’t actually observe a vow of silence and they’re called Trappists (and Trappistines for the nuns) because their order originated at La Trappe Abbey in Normandy, not because they keep their traps shut. Who knew? These days, of course, to pre-empt any rowdiness in the order, they take a vow of applause.

The power of silence is the greatest power we have. Just as the gaps between the tines of a fork are what give its prongs their penetration, it’s the silence between the words that makes them stick. A little less conversation, a little more reflection.

There is nothing more powerful than a well observed moment of silence in a packed sports stadium. And I remember standing on the roof of an office in Regent Street a week after the 7/7 London bombings, watching the traffic stop and the whole street fall silent for two minutes. It wasn’t just the silence, it was the stillness. In this day and age, to stop what you’re doing, put your phone away and be silent for two minutes is really quite something.