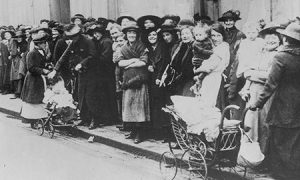 Apologies for the delay. Just trying to stay on trend.

Speaking of foreign relations, what would you do if you had a French teenager coming to stay for four days and you wanted to give them an unforgettable impression of England? Buy them a pint? Order a takeaway? Play them the highlights of the Kazakhstan v Scotland game?

The quintessential English experience is hard to define outside the cricket season, so we’re going to go to London, catch the Clipper up and down the Thames and jump off at any attraction with a hint of Shakespeare, Royalty or torture. I suppose we could go to a performance of King Lear and tick off all three at once.

Of course, ask any European for their English stereotype and they’ll mention fish & chips, hooliganism and queuing. But it’s ironic that we should be known as a nation that queues because we got the word ‘queue’ from the French (meaning tail) and only started using it to mean a line of people waiting for something in the 1800s.

The French pronounce it ‘kuh’, which also happens to be the noise they make when forced to stand in one. “Kuh, queue, pah!”

With the exception of Z, it is the least used letter in the English language and it insists on being chaperoned by the letter U just about everywhere it goes, with a handful of exceptions adopted into English solely to cause fights among Scrabble players.

The other quite interesting thing about the word queue is that it’s the only word in which the ‘qu’ is pronounced as a ‘kyu’ sound (he said authoritatively, having followed up a hunch with a quick skim of the internet). In all other instances it is either the soft ‘kwe’ sound, as in question, or the hard ‘ke’ as in oblique.

We originally allowed ‘queue’ across the Channel because we needed a word for those string or ribbon bands that dangle from a letter with wax seals on the end of them. Then we adopted the animal’s tail meaning, then a line of dancers, a length of braided hair… But queuing as we know it today? Apparently not until the very end of the 19th century.

And when you think about it, an orderly queue is a very Victorian concept, but one that has stood the test of time nevertheless. Whatever you think about Brexit, at least we’ll be getting our queues back. Miles of them, apparently. Although, of course, even the delays have been delayed.

So we’re giving Emile a taste of good old English queuing in advance of Le Grand Delay and hopefully he’ll go back to France an unwavering anglophile.