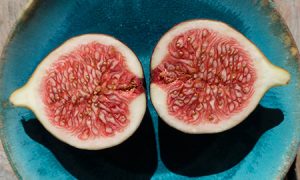 Anyone got any good fig recipes? I’ve got figs like other people have mice. Don’t get me wrong, I love a fig. This ancient, nutritious fruit, possibly the first foodstuff to be cultivated, is an exotic treat of a Friday morning in early autumn. Figs also carry their flowers inside the fruit and you have to respect them for that. It’s just that they don’t last.

You pick one in the morning, all plump, sweet and juicy, leave it on the kitchen worktop and by the time you get home in the evening it’s metamorphosed into something resembling a small, desiccated testicle with a creeping patina of mildew. Not so much the aphrodisiac.

So I’m looking for something to make with figs that’s quick and easy. A jam, a compote, a cake, an avant-garde bathroom cabinet… anything other than compost. And while we’re at it, like everyone who happens to have an apple tree in their garden, I’m looking for someone with a cider press. You know, one of those go-ahead firms that take your apples and give you a few bottles of mind-bending juice in exchange. There’s one in Godalming. It might as well be in Timbuktu. There should be one in every town.

Or maybe you couldn’t give a fig for my apples. That funny expression comes from the use of fig in the 16th century to mean a small, insignificant thing. But giving the fig… now that’s a different kettle of fruit altogether. Giving the fig is an old-fashioned form of ‘flipping the bird’ – an insulting gesture, popular in Mediterranean countries, made with two fingers and thumb.

Why fig? Because the Greeks, with their obsession for anything vaguely sexual, decided the inside of a fig looked like a – ahem – vulva. Too many years away laying siege to Troy. So their word for fig, ‘sykon’, also became their word for the aforementioned unmentionable.

And here’s the quite interesting bit. From this fruity use of language we get the word ‘sychophant’, literally meaning ‘one who shows the fig’, because the original sycophants were lackeys employed by Greek politicians to heckle their opponents, including shouting insults and ‘giving them the fig’. Think Michael Gove in a toga.

Now, where did I put those desiccated testicles?