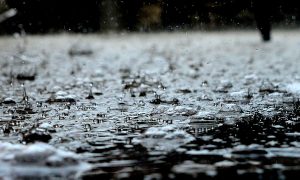 Why does some rain fall harder than other rain? Anyone who was caught in the rain yesterday evening will, no doubt, have pondered the same question. It was one of those downpours that causes people to use words like “Biblical” and make jokes about building an ark.

Just when it seemed to be easing off, it would redouble its efforts and fall harder than ever, as if someone was wringing out a giant flannel somewhere over Redhill. It was quite exciting, until I remembered I was wearing a set of overalls that were about as water-resistant as King Canute. “Soggy bottom” doesn’t begin to describe it.

So let’s examine this question of hard rain. I don’t remember much about the Physics I learnt at school but I do have a vague recollection of something about Galileo dropping a sack of hammers and a sack of feathers from the top of a church tower and the two hitting the vicar at the same time. Something like that.

Commander Scott, of Apollo 15, not the Antarctic, did a similar thing on the Moon. Taking advantage of the absence of any air resistance up there, he tested Galileo’s theory by dropping a hammer and a feather. Guess what? They hit the Moon at the same time, shifting it out of its orbit and triggering a period of catastrophic global warming that caused fights on tube trains.

Apart from that, what Galileo and Scott proved was that things fall at the same rate regardless of how heavy they are. (It also proved that Scott was, indeed, on the Moon and not in a studio in Idaho.) So how can one lot of rain drops hit you harder than another, as if someone’s just opened the tap a bit further?

I was going to leave this hanging and hope that vast numbers of you wrote in with your theories, but then I looked it up and it’s really quite simple. Harder rain equals bigger raindrops. You get bigger raindrops when there’s a bigger updraft in the clouds, because the droplets are held up there longer as they gain size.

When they come down they have more momentum than smaller drops because they have more mass, so while their velocity may be the same, they hit you harder. Just ask that vicar. He would have told Galileo that the sack of feathers was no problem but the hammers hurt a lot. So much so, in fact, that he’s had to cancel his sermon on Sunday and his mum’s coming to take him to hospital.

It’s also true that bigger raindrops tend to fall from higher clouds and accelerate to a higher velocity before blasting through your waterproofs. So what was going on last night was two tiers of rain clouds taking it in turns, rather like the ranks of red-coated British troops in Zulu, the lower lot hitting us with their steady fall and then parting to let the higher lot pelt us with their massive drops.

Who would have thought that clouds could be that organised? They always seem so vague.

If anything useful has come out of this experience, it’s the discovery that raindrops aren’t the teardrop shape you see on your forecast app; they’re the shape of a small bap, flattened on the underside by the air resistance as they fall. (This is the sort of knowledge you pick up when you’re thorough with your research.) Apparently they’re a different shape on the Moon.