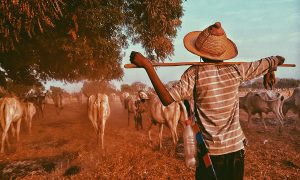 The word ‘gallivanting’ came up the other day and I thought, “Great! That’s Word of the Week taken care of.” But on further investigation, it turned out that ‘gallivanting’, for all its syllables and connotations of wanton behaviour, is a rather one-dimensional word with very little to say for itself. A word of no known origin but possibly derived from ‘gallant’. How disappointing.

But just as I was about to close the book on ‘gallivanting’, another word caught my eye; a word that is synonymous with ‘gallivant’. “Surely not ‘stick’!” I hear you cry. No, not stick. Not yet. The word that caught my eye was ‘gad’.

Gad, like gallivant, conjures up images of dandies prancing about from place to place, possibly on a horse, possibly not, generally being irresponsible. It has its spin-offs too: gadabout (one who gads) and gadfly (another one who gads).

“What about the stick?” I hear you sigh. Stick with it, it’s coming.

“Well, can’t you just use that long, pointed stick over there?”

Back in the Dark Ages, Germanic tribes developed a fondness for words involving lots of Gs and Ds and the occasional Z and they all meant something thin and pointy. In some cases it was a rod, in others it was a nail or a spike. From these came the word ‘gad’, but also ‘yard’. The yard-arm of a ship is so called because of its shape, not because of its length. Let’s face it, if it was only a yard long the ship would probably fall over or something.

Clearly words containing Gs and Ds weren’t the origin of the word ‘stick’, though. That was the German ‘stecken’, which meant to stab or prick. In other words, what you might do with a gad, rather than the gad itself. But there is a point at which the bloodline of the two words merges. Both have their roots in the Latin ‘instigare’, which meant (you guessed it) instigate or (you may not have guessed) goad. And from goad it is but a short step to gad.

So why is this joke funny?
Q: What’s brown and sticky?
A: A stick.
A stick isn’t sticky, unless you’ve stuck it in a beehive. But because sticks were used for sticking into things, the verb ‘to stick’ came to apply to anything that was fixed in place, whether that was through the use of drawing pins or glue.

If you’re a stickler for the correct use of these words, though, you might be disappointed to learn that ‘stickler’ has no ancestral relationship with ‘stick’ and, therefore, no place in this article. Sorry about that. I just thought it was interesting that ‘stickler’ comes from the 16th century word ‘stickle’, which meant to mediate, not from ‘stick’ which didn’t.

Stuck for words? Get in touch to talk about how Balance can make your content more sticky.