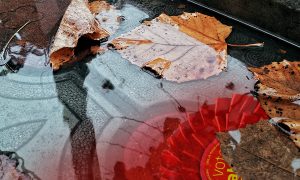 They’ve done the math, now for the aftermath.

In an attempt to take my mind off things, I’ve been studying Greek. It helps to understand manifestos. Mathematics, I discovered, comes from two Greek words: ‘mathema’ (knowledge) and tekhne (technical). So the ‘math’ bit refers to knowledge, hence ‘polymath’: someone who knows a lot – a smartarse.

The American use of ‘math’ as opposed to our ‘maths’ is, once again, not an insolent abandonment of good old English tradition. ‘Mathematics’ was originally the singular ‘mathematic’ in Britain until the early 17th century, when the Pilgrim Fathers were casting off from Plymouth, so its entirely reasonable that ‘math’ should have sailed with them and survived Stateside to this day.

Aftermath, however, does not mean ‘the mathematic that comes after’ or ‘the knowledge that comes after’, or even ‘the thing that follows learning’. It has nothing to do with learning – unless you happen to be learning about grass.

Math, in the case of aftermath, comes from an Old English word  ‘mæð’, pronounced ‘med’, which meant a cutting of grass. You’ve probably spotted it’s where we get ‘meadow’ from. An aftermath was a second crop of grass on a piece of land where a first had already been harvested.

In 1873, eight years after the end of the American Civil War, the poet Henry Wadsworth Longfellow wrote a poem about it.

When the summer fields are mown,
When the birds are fledged and flown,
And the dry leaves strew the path;
With the falling of the snow,
With the cawing of the crow,
Once again the fields we mow
And gather in the aftermath.

Not the sweet, new grass with flowers
Is this harvesting of ours;
Not the upland clover bloom;
But the rowen mixed with weeds,
Tangled tufts from marsh and meads,
Where the poppy drops its seeds
In the silence and the gloom.

Aftermath is ostensibly about the misery of winter but don’t you hear distinct echoes of the battlefield and the grim task of bringing in the bodies? ‘Not the sweet, new grass with flowers is this harvesting of ours’.

Today, ‘aftermath’ always signifies that something bad has just happened.