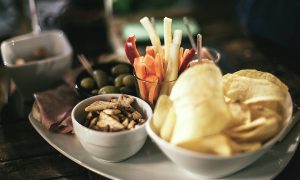 Those of you with long memories and a birth date prior to 1970 will immediately recognise this as the register of names that featured in Rowan Atkinson’s ‘schoolmaster’ sketch, one of the highlights of The Secret Policeman’s Ball of 1979 – back in the days when charity fundraisers brought out the best in live entertainment, not the worst.

I was prompted to dig out this clip because of one word: Nibble. No-one says it quite like Rowan Atkinson, though Garfield comes a close second. Christmas is a time for nibbles, so much so that I appear to have put on rather a lot of weight. And that’s the problem with nibbles: once you start, you can’t stop.

It’s probably untrue to say the Victorians invented the nibble, so I won’t say they did. The verb ‘to nibble’ came into English around 1500 and the etymologists say it may have come from the Low German ‘nibbeln’, meaning ‘to nibble’. It seems a pretty fair guess, doesn’t it?

But the Victorians were the first to start using ‘nibble’ as a noun in the way that we use it today; a small bite, a morsel, a snack. That’s because the Victorians revolutionised cooking. They stopped using open fires and started cooking on big, cast iron stoves. Having spent the morning firing these beasts up, they spent the rest of the day cooking to make it all worthwhile. Pastries, jellies, pies, biscuits, oysters, breads… All sorts of delicacies to nibble on. And then they invented afternoon tea. The age of the nibble had truly arrived.

Exactly one hundred years ago, in a garage in Cricklewood, a man called Frank Smith started to make crisps on an industrial scale. He supplied the pub next door, the Cricklewood Crown (it’s still there if you want to pay homage) with his crisps, along with salt dispensers, but the regulars nicked the dispensers so he started putting little sachets of salt in with the crisps.

Smith’s Crisps came in tins up until the 1960s, when something of a nibble war erupted. First Golden Wonder invented Ready Salted, doing away with the need for the Salt’n’Shake salt sachets, and then they started to produce flavoured crisps. Smiths, Walkers and other brands responded and by the end of the decade the UK crisp market had doubled in size.

Today crisps make up 60% of the UK nibble market, with 6.6 billion packets sold each year. Apparently that’s enough spuds to fill Wembley Stadium. If you want to know what that looks like, Google ‘2019 Community Shield’.