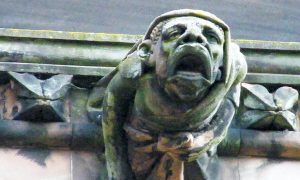 The sun is out, the sky is blue, Trump hasn’t nuked anyone for a day or two, but it’s raining – raining in my heart.

For reasons best known to itself, and without issuing demands, some virus or bacterium or other has chosen to attack my head, causing the various fleshy chambers inside by skull to go into the mucus business, in the same way that Ford went into the car business.

I’m not sure who this is supposed to benefit. From my narrow understanding of biology, mucus is something we produce for protection. I really don’t feel protected. I feel swamped, inundated, whelmed. Every few seconds it trickles down to my throat and triggers a cough reflex, which (it says here) is the body’s way of clearing out unwanted particles.

So what you’ve got is a head delivering gallons of mucus to a throat that doesn’t want it and immediately throws it out. It’s like junk mail. Why my brain can’t see this and just cut off the mucus at source, I have no idea. Something, I suspect, is pulling the wool over its eyes. It certainly feels that way. What I do know is that all that coughing has given me the mother and father of sore throats. So this week I have been mostly gargling with TCP.

TCP (why they can’t just call it trichlorophenylmethyliodosalicyl…) is not a pleasant substance. It’s not something you want to swallow if you can help it. Even diluted 5:1, it tastes like divine retribution. The trick is to keep it bubbling around the problem area for a few seconds and then spit it out. This is made harder by the immediate cough reflex that kicks in as soon as the foul liquid touches the back of your throat, sending a fine mist of diluted TCP spraying all over the kitchen windows. The neighbours thought I’d been possessed. On the plus side, though, you can save a fortune on Windolene.

I was interested to discover that the word ‘gargle’ is closely related to ‘gargoyle’. Apparently it’s to do with the gurgling sound water makes when running through a spout, but I’ve seen a few gargoyle’s that look like they’ve swallowed a mouthful of TCP and right now, we could be related.