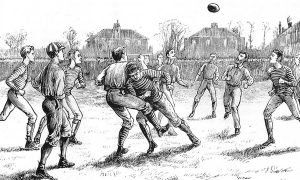 At 11pm tonight (our time, not their time), the UK leaves the EU. Life will never be the same again. Well, until 2.15pm tomorrow when Wales welcome Italy to Cardiff. And then 4.45pm when Scotland play Ireland in Dublin. And then 3pm on Sunday, when England tackle France in Paris.

Tackle – there’s a word that transcends international borders – French: tacle; Welsh: taclo; Scottish: tackle… We adopted it from the Germans and it has become an essential word in the culture of English-speaking countries.

About 200 years ago, when football was still a thinly disguised street brawl, employed to toughen up public school boys ready for the front benches, and William Webb Ellis was still plucking up the courage to pick up the ball and run with it, the word ‘tackle’ began to enter the sporting vernacular.

Up until that point it had been used mostly as a noun, initially meaning the ingenious combination of ropes and pulleys that lifted heavy stones to the tops of temples or manipulated the rigging on a ship (from the Old German ‘takel’), then the gubbins that anglers love to collect, and then the strapping applied to a horse to encourage it to see reason and not leave you clinging on to its mane from underneath as the rocks and stones of the beautiful Welsh countryside flash inches past your head. Yes, I’ve been pony trekking.

Somehow, from all that grappling and manhandling, ‘tackle’ had evolved into a verb meaning ‘to get physically involved with something or someone’ and from there came the sporting sense of stopping your opponent’s progress by kicking him in the shins.

These days you’re not allowed to do that and people say the game has lost its edge. The practice of kicking people in the shins (known as ‘hacking’) was so intrinsic to the embryonic forms of both football and rugby that when the leading clubs and public schools met in 1863 to form the Football Association and try to agree on some rules, it was an argument over hacking that divided the room and brought about the separation of rugby football (rugger) and association football (soccer).

It seems apposite, today of all days, to quote what Francis Maule Campbell, Treasurer of Blackheath FC and chief defender of the brutal art of hacking, said in his address to that historic meeting:

“If you do away with hacking, you will do away with all the courage and pluck of the game, and I will be bound to bring over a lot of Frenchmen who would beat you with a week’s practice.”

He didn’t. Instead Blackheath became a rugby club, the oldest ‘open’ rugby club in the world, with notable players including Mickey Skinner, the fictional Doctor Watson and that legendary son of Croydon, Charles Burgess Fry.

CB Fry was better known for his cricket, football and long jump, insomuch as he captained England at cricket, played for Southampton and England at football, reaching the 1902 FA Cup Final, and was co-holder of the long jump World Record. And they complain about having too many fixtures these days!

It doesn’t stop there. Fry dabbled in politics and did a stint at the newly formed League of Nations in the early twenties, where he claimed to have been offered the throne of Albania. In the modern context, that’s the equivalent of merging Joe Root, Wayne Bridge and Greg Rutherford into one superbeing and asking them/him to solve the Palestinian question.

Fry turned down Albania, presumably due to time constraints, so we never got to see just how far his talents could stretch, but here was a man who could leap onto a mantelpiece from a standing start, so there’s a fair chance he would have successfully tackled the Balkan conflict too?