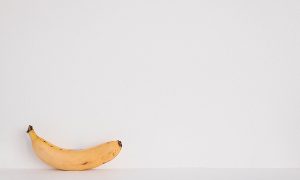 Do you ever stop and wonder about the provenance of certain facts? Four thousand holes in Blackburn, Lancashire? Says who? It’s a well known fact that bananas are a rich source of potassium. But how do we know that? It’s not something you can tell with the naked eye.

Even if you looked at a banana under a microscope, would you be able to spot the potassium? I wasn’t great at chemistry at school but I do recall potassium for two reasons: 1, its symbol was K, which made no sense at all; and 2, it always seemed to catch fire before you could get a good look at it. So who would have even begun to imagine there was potassium in a banana? I’ve eaten bananas all my life but I’ve never known one to spontaneously combust.

All this had me wondering who it was who first discovered that bananas are a rich source of potassium. I mean, who has time for that sort of thing? Alas, several hours scouring the internet proved fruitless (pardon the pun). I can only assume it was one of the food science pioneers of the early 20th century.

Yes, food science really is that young. Scientists had had a hunch for years that there was a relationship between food deficiencies and certain diseases, like rickets and scurvy. They had scored some success by giving limes to sailors, but the actual discovery of vitamin C didn’t happen until the 1930s.

The concept of vitamins had been pioneered in 1912 by the fabulously named Casimir Funk, who should have been a 70s bass player but mistimed his run and became a turn-of-the-century Polish biochemist studying beriberi. Funk proposed that the nutrients required to stave off beriberi, scurvy, rickets etc must all be some sort of vital amine – an amine being, um, er… let’s open that up to the class.

Anyway, you see where the Funk was leading us. Vital amines became abbreviated to ‘vitamines’, which later became ‘vitamins’ when some other clever dick proved that they weren’t all amines (whatever they are). But Funk had triggered an era of discovery that couldn’t have been more timely. Just as online communication tools evolved just in time for the Covid pandemic, the development of food science was the silver lining for the Great Depression and World War II.

As well as the Wall Street Crash, 1929 was the year that scientists learnt to detect trace elements in bananas by setting fire to them (I may not have entirely grasped the science). By the end of 1940, they’d learnt to synthesise vitamins A, B, C, D, E and K (whatever happened to F, G, H, I and J?) as well as Thiamin, Niacin, Riboflavin and all that other stuff you find on the Cornflake packet. If people were going to die, it wouldn’t be through malnutrition.

As for those four thousand holes, 1940 also gave us John Winston Lennon. He’d have been 80 today. Imagine that.