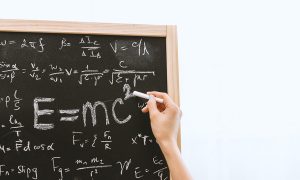 Imagine being in charge of a commercial airline when the jet engine was invented. Would you concern yourself with how this new, superpowered contraption works? Or would you focus on all the possibilities that it offers for your airline?

Business leaders struggling with the mind-blowing concept of quantum computing would be well advised to take the same approach. Never mind how this complicated stuff works, just think what it could do for your business!

What is quantum computing?

OK, it helps to have some understanding of what quantum computing is. Let’s begin with the word ‘quantum’: a word given to the world by the Romans but adopted by physicists to refer to the smallest quantity of any physical entity. So we’re dealing with very small particles here and their behaviour in the Universe, but that’s as much science as you need to know.

Traditional computing, as you know, uses binary units called bits; 1s and 0s that work in an either/or format of rapid trial and error. Quantum computing uses qubits, which can be both 1s and 0s, so they can do two calculations at once. Double the speed, right? Wrong. Qubits give an exponential gain, so 10 qubits can do 1,000 calculations, 30 qubits can do a billion and…

You get the point. Quantum computers are phenomenally fast. However, they are also prone to getting things wrong. I know – seems strange for a computer to get things wrong but they do. Sometimes. So the application of quantum computing works best as a hybrid with traditional computing, where the speed of one is underpinned by the accuracy of the other.

So how can this ultrafast computer power improve the way your business works? In essence, any calculation that requires vast amounts of trial and error is a candidate for quantum computing. It might help to look at some of the applications that are already in development. We can illustrate this by looking at some examples of where quantum computing solutions are being developed right now.

The future development of many chemistry-based technologies relies on the ability to simulate the makeup and behaviour of molecules. This would replace the traditional trial and error experiments with much greater speed and precision, but it requires vast computing power. Quantum computers could provide the solution. Applications being developed include the engineering of proteins for medical purposes, a more energy-efficient method of making fertilisers and the development of battery cells for electric cars.

The speed and efficiency with which traffic moves is increasingly important as we move to cut emissions, save fuel and prepare the way for autonomous vehicles. Traffic management requires a powerful combination of pattern recognition and predictive analysis in order to plot optimum routes that can be altered in real-time as unpredictable traffic conditions evolve. Specific applications include plotting delivery routes for logistics and managing large crowds at events.

Traffic management is one example of AI and machine learning in action. AI is basically the ability of a computer to learn from experience. Again, it’s trial and error at a fast pace. Experience will be programmed in by a human initially and then it will start to grow autonomously from the feedback. Traditional computers have already shown remarkable capabilities to learn and ‘think’ for themselves, but quantum computers could carry out the trial and error sequences required to gain knowledge so much faster.

If you think traffic is unpredictable, the weather is even more so. And that’s because the computers currently being used to analyse patterns and build models aren’t yet powerful enough to handle all the variables involved. Quantum computing could change all that, enabling us to not only make more accurate weather forecasts but also to gain a better understanding of climate change and its influencing factors.

This is an interesting one because the constant battle between good and evil in cyberspace will tip dramatically towards the bad guys thanks to quantum computing, unless a new approach to security is found. Why? Because hackers employ trial and error methodologies to crack security codes and anything that speeds up the process gives them a better chance of getting in before their attempt is discovered. So the race is on to find a way to use quantum computing to build new security structures that present a whole new challenge to hackers and keep the good guys on top.

What should you be doing now?

Quantum computing is still in its infancy. The first developed applications are not expected for another 10 years and there are still many questions to be answered as to how or if it will replace the role of traditional computing today.

It pays to be ready, though. Like the airline owner who thought the propellor plane was all he needed, you don’t want to be left on the ground when all around you are taking off.

This article was written on behalf of Origo.is

Photo by JESHOOTS.com from Pexels