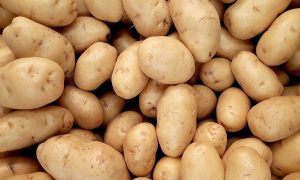 If you were a potato (and that’s a big ‘if’), how would you want to be cooked? This question cropped up today in one of those high-level strategic planning meetings and I have to say I’m still struggling to decide.

The question presumes, of course, that you would want to be cooked at all. Maybe not all potatoes see that as their destiny. There might be potatoes who dream of being a Hollywood actor or an astronaut or even President of the United States. Hell, there might even be a potato that has achieved that!

Potatoes, as everyone knows, were invented by Walter Raleigh for playing bowls. They took their name from the Haitian ‘batata’ (originally sweet potato) and were found to have a multitude of uses. You can boil them, bake them, roast them, fry them, chip them, mash them, rice them, slice them or cut shapes in them for printing.

They make very good ammunition too, hence the spud gun, although perhaps surprisingly there are no accounts of them having been used decisively in the theatre of war.

One thing that history does record, as evidenced by this British Library video, is the use of “spuds” in what academics call “counting out” games. I’m talking, of course, about the old “One potato, two potato, three potato, four…” rhyme used to decide who was “it”.

“Spuds in” was actually one of the more sensible examples, in that it had an element of counting and it used everyday words. You don’t get much more everyday than potato. Go back to the 19th century and the kids were reciting chants that must have made their parents think they’d been possessed by the witches from Macbeth.

It certainly does. But all this is straying from the point. What is the best way to cook a potato? First, choose your potato carefully – different varieties lend themselves best to different cooking methods. The Jersey Royal, for example, regarded by many as the king of potatoes, makes a disappointing bake.

Sources differ as to just how many varieties of potato there are, but I place my trust in the International Potato Center (CIP), on the basis that it’s based in Peru, cradle of the potato industry, and that the organisation has one of my favourite Vision Statements: “A healthy, inclusive and resilient world through root and tuber systems.”

Who wouldn’t want that? The CIP says there are over 4,000 varieties of native potatoes, and according to BBC Good Food, about 80 are grown commercially. That’s a lot of choice, so do your homework. If you want to grow your own, I refer you to this Word of the Week from March 2017. Longstanding readers will remember it as ‘chit’. You can make your own mind up.

Gathering popularity, I’m told, are Hasselback Potatoes, a Swedish dish that involves putting your spud in a large spoon and slicing it most of the way through so it opens up like a toast rack. The spoon stops you cutting all the way through. You then fill the gaps with butter and spices and cook it in the oven, giving you a potato that combines the best attributes of a baker, roasties and crisps all in one and, when you run your fork across it, doubles up as an avant-garde percussion instrument.