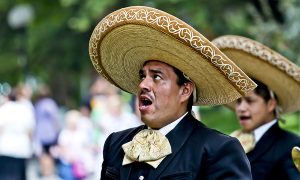 It’s always struck me as tragic how something as instinctive as singing, something so fundamental to human communication and bonding, is beyond the skillset of most of us, myself included. How many gibbons are rubbish at swinging through trees? How many squirrels get laughed at for their inability to bury nuts? There may be some but no way it’s 60%.

So why are more than half the human race incapable of holding a tune? It’s baffling. There are even professional musicians who are brilliant at the trumpet, say, but when they come to sing they sound like a ferry coming into Dover.

What makes matters worse is that even those of us who can’t sing know bad singing when we hear it. I just scored 100% in this canny little listening test but ask me to sing Bridge Over Troubled Water and you’ll have a murder case on your hands.

Apparently it’s all to do with the brain’s inability to match the signal it sends to your vocal chords to the signal it’s receiving from the ear. It might hear a C but for some reason it calls for a B. Or even something between a B and a C, a sound interval so minuscule that even the Hadron Collider couldn’t pick it up, yet the human ear can and it’s enough to send us running for cover.

There’s a scene in Citizen Kane that captures it perfectly. Kane has paid for his second wife to sing the lead in an opera, but she’s not very good. She can sing better than most of us but it’s not opera quality, there’s a flatness to her voice, and as she gives it her all, the camera rises up into the flies, where two stage hands are sitting listening to the notes drifting up. One turns to the other and pinches his nose. It’s cruel. And it confirms for everyone who has doubts over their ability to sing that it’s best not to try. Which is a real shame, because we all need to sing.

It’s also confusing because there is a sliding scale of acceptability. We’ll tolerate inaccuracies in live singing more than we will in a recording, for instance. And if a singer has a particularly characterful voice, we’ll happily put up with a few bum notes. Leonard Cohen anybody? In fact, all the music I listened to in the late 70s was more about the character than the intonation. Punk gave hope to all of us. But times have changed.

I’m always trying to work out where on that sliding scale I am, so I can judge whether I should continue to sing in a band or save my singing for when crowds are allowed again. My wife, who has made a career out of her enviable ability to sing, gives me mixed messages. “You can sing,” she says kindly, but whenever I do, she goes out.

So I asked her for some clarity and she directed me to a video of Peter Andre and Jordan singing a duet of A Whole New World. (Just give it 90 seconds.) This was supposed to encourage me but it left me mildly traumatised – not because poor old Jordan was so tuneless but because I could imagine myself in her shoes (not literally – I’d get cramp).

It’s like those dreams you have of knocking up on Centre Court at Wimbledon and pinging balls into the Royal Box while Roger Federer glares at you from the other end, because actually you can’t play tennis; or waiting in the wings at Covent Garden, all tights and feathers, knowing that you haven’t the faintest idea how to dance. Please don’t tell me that’s just me.

Dancing, singing, painting… these are all things our ancient forebears enjoyed without any self-consciousness. (I’m making an assumption here. It’s possible that the person who did that hand print on the cave wall at Sulawesi 40,000 years ago was laughed out of art school by some hoity-toity hominid in a mammoth skin cravat and smoking jacket. But I doubt it.)

The problem is, we don’t sing enough. Rather than zipping it and leaving it to those who excel, we should all sing more and be more tolerant of one another’s bum notes. We need to remould our brains to send the right signals and the only way to do that is to practice. From a young age we should be taught to sing and dance, and we should do it as often as possible, so we don’t lose the skills that make us human.

Right, you’ve been a wonderful audience. This next one’s called All By Myself.