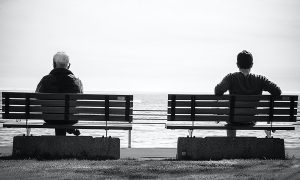 Ah, OK, it’s been a while but I thought there might be one or two of you left when I got back. You can only wait so long, I guess, especially when you have no idea when or if the thing you’re waiting for is actually going to happen.

I was wrestling with this dilemma a couple of days ago. For precautionary reasons, my new doctor decided to open his account by sending me for a chest Xray. Last time I had a chest Xray was in Qatar, where you undergo to a humiliation ritual (aka a medical) to get your ID card. I found myself standing naked to the waist in line with hundreds of sinewy Nepalese workmen, who all had the muscle tone of Bruce Lee and looked like they could build a World Cup stadium with their bare hands. In fact, I believe they did.

Having your chest Xrayed is not as easy as it sounds. You have to stand with both hands palm outwards on your hips, in a sort of double-handled teapot pose, and then press your chest against the cold plastic plate, while trying to maintain the illusion of manliness.

So I was keen to get on with it this time but instead I found myself in the Xray waiting room waiting. And waiting. I tried jumping the queue by telling them I was an eminent consultant but they saw right through me.

I decided I’d give it an hour but, of course, as the hour mark approached I realised that if I gave up now they would be bound to call my name just after I’d gone. So I hung on, caught up in a rolling trap from which the only escape was to wait my turn, even if that took until the end of time. It didn’t. Not quite.

The trouble is I’m not good at waiting. In fact, I’m still waiting to meet anybody who is. It goes against human nature. We are innately impatient. That’s why we look at our phones all the time, to fill every second of down time. There was no internet in the Xray waiting room, though, so I had to practise.

I’ve spent a fair few hours and days in various hospitals over the last four months and most of that time has been spent waiting. It’s no accident that hospital inmates are called patients. It comes from the Latin for endurance. So I’ve had plenty of opportunity to work on my technique.

It’s all about relaxing the mind, letting go of expectations and allowing your imagination to take you out of your immediate environment. I’m getting better at it, though I haven’t yet reached the level where I can save money on a summer holiday and take an out of body experience instead.

I’ve also been taking lessons from my cat, who is a master at waiting (no, I don’t mean silver service, although he’s improving at that too). There is a patch of long grass in the garden that is home to all manner of small, furry animals and he will stand and gaze at it for hours on end, waiting for something to move that he can pounce on.

And this, it turns out, is where the word waiting originated. There was a hostile meaning to it, as in waiting and watching, whether waiting to spring an attack or watching out for one. And that’s where we get the word ‘waiter’ from – a watcher, a guard or attendant, a person who brings the ketchup.

And indeed it is with relish that I hope to get back into the rhythm of making Word of the Week fulfil the promise of its name. Sorry to have kept you waiting so long.

What do you mean you hadn’t noticed?!