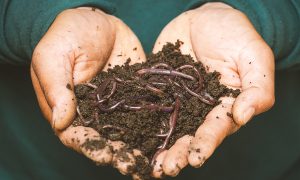 Every week when I begin this process I think it’s about time I made ‘word’ the word of the week. This week, as you can see, I came very close but ultimately succumbed to a Ronnie Barkeresque exchange of words for worms.

The reason being that I received some worms in the post on Wednesday – something that would normally be a police matter, but in this instance it wasn’t hate mail, I had actually ordered them. Before the militant animal rights activists among you take umbrage and send me something more explosive in the post, I can assure you that the worms arrived unruffled and ready to go to work (another word that is nearly the same as ‘word’ but also means something completely different.)

The work in question was composting – a skill for which worms are the acknowledged experts, able to digest half their bodyweight per day. You might not be impressed by that, given that the average worm weighs only a couple of grams, but considering they’re 90 per cent water, that’s a pretty good effort by the other 10 per cent.

I have to tell you here that I have never managed to create compost like the stuff you see Monty Don wearing on Gardeners’ World. In fact, I seem to have a knack for preserving things on my compost heap. Strawberries (yep, we’re back on strawberries), which normally go mouldy in two days in the fridge, develop a half life to rival uranium as soon they settle on my heap.

I used to have a similar problem with fireplaces. In most buildings, if a fire breaks out, the thing to do is evacuate the building as quickly as possible. In my first house, the safest thing to do was jump in the fireplace. Nothing ever burned in there.

Anyway, I went to unleash my new acquisition on the compost heap and lying there, bold as brass, were a couple of slow worms, big ones, which made my battalion of brandling worms look somewhat understaffed. Slow worms may be harmless to humans but their attitude to brandling worms is like my attitude to Creme Eggs: eat first, ask questions later.

They also have the disconcerting ability to detach their tail when attacked and the tail to carry on crawling about to distract the predator while the head end finds cover. Plus, they’re protected by law, so all in all there’s not much point in taking them on.

Despite their name, though, they’re not worms. They’re lizards without legs, much prettier than worms with their eyelids and ears, but nowhere near as hardworking when it comes to compost heaps. In fact, these ones were positively idle, hence the name I guess, just soaking up the warmth and waiting for some mug to come and drop a fresh consignment of brandling worms in their laps. Which, of course, they don’t have either.

Anyway, after this episode I did some sums and worked out that the amount I had paid for the small packet of worms made them the most expensive food, pound for pound, that I have ever bought, with the possible exception of saffron. Or a Gail’s cinnamon bun. I know, I know, they weren’t supposed to be food, but try telling a slow worm that.