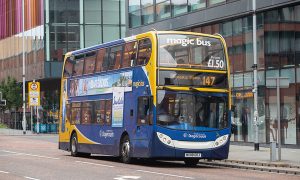 My friend Toddy likes trains. There, I’ve said it. As if that’s not weird enough, he also plays keyboard in my band (or “our” band, as the others like to call it). How either of these things came to pass is a mystery to me. I just turned around one day and there he was, thumping out great trumpet sounds with a look of intense concentration on his face. And then he got his keyboard out. Fnarr fnarr.

I mention his love of trains for two reasons: 1, it worries me a little; 2, because lately I have developed a passion for public transport myself. For reasons I won’t bore you with, I’ve been riding the 147 bus from Manchester Piccadilly to Withington and back and there is so much to love.

Firstly, it runs every 10 minutes and comes on time. Secondly, the payment machine lights up like a spaceship at the tap of your card and leaves you in no doubt that your payment has been accepted.

Just being able to pay on the bus again is a dream. Last time I caught a bus in Greater London, I had to miss the first one and walk back quarter of a mile to the nearest sweetshop to buy a ticket. Who’s idea was that?

“Two tickets for No Time To Die please.”

“We don’t sell film tickets here, mate. This is a cinema. Try Boots.”

Hang on! Doesn’t Boris claim credit for inventing the London bus? It must have been his hare-brained idea. That said, when I was about three I went into a haberdasher’s shop and asked if I could buy a tea strainer. Seems I was years ahead of my time. (Anyone under the age of 40 may have to look up “haberdasher” and “tea strainer”.)

The next thing is sitting upstairs, ideally in the front seat. When the bus turns 90 degrees, it’s as if the whole world is sliding across your field of vision like one of those carousels on web pages. I’d forgotten how trippy that is. When they pull up behind another bus you think you’re going to crash but they stop just in time, with inches to spare. It’s really quite a rush.

And then there are bus lanes. I used to regard bus lanes as evil traps, where coppers would leap out from nowhere and nick you if you so much as inched a wheel into one while trying to weave through the traffic. Now I see it from the bus’ point of view, bus lanes are one of the best things in the world. They make you feel like you’re winning at life.

The 147 is called a “Magic Bus” and with full justification. I made the mistake of catching a 43 yesterday, which isn’t a Magic bus, and it cost me £1 more for the same journey. I asked why and was told the Magic Bus is cheaper because the students use it and it tends to get rammed (as in full, not as in road rage). So I went upstairs on the 43 and guess what – rammed with students. A little word to the wise if you’re ever in Manchester.

Of course, the brilliant thing about buses, trains and trams (another glorious experience) is that they don’t seem to run out of fuel. I know that’s tempting fate and if you ever hear an announcement this winter that your train has been delayed because the driver couldn’t find any unleaded, I apologise.

But the real fuel crisis is that we burn so much of the stuff, so if a few weeks with your car stuck on the drive means a reprieve for some tree frog and no-one has to get glued to the motorway, we should all embrace it really. It’s another resounding triumph for Brexit.