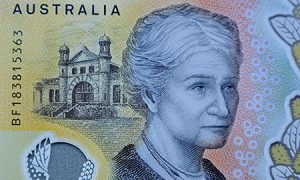 Sometimes when I’m writing this stuff and I find myself putting myself into the story (oh no, there I go again!), I cringe and yearn for those innocent, ego-free days of three years ago when this Word of the Week lark began with a brief, impersonal essay on the word cheese.

There was, as the old saying goes, no ‘i’ in cheese. Fast forward to this week’s word and you’ll notice that there are not one but three ‘i’s in responsibility. Or two if you’re Australian.

In case you missed it, some eagle-eyed money-reading enthusiast revealed this week that the new Australian $50 bill featured a typographical error. The word ‘responsibility’ was printed without its last ‘i’. And, of course, everyone pounced on it. Even renowned typo specialists The Guardian published the story, under the headline: ‘Australian $50 note typo: spelling mistake printed 46 million times’. ‘Pot and kettle’ might have sufficed.

Reassuringly, they got the figure wrong: there were actually 400 million of the notes printed. That’s a twenty billion dollar cock-up! And the typo was repeated three times on each note. You have to smile… especially when the next Ashes series comes around.

It’s a delicious irony that the misspelt word just happened to be ‘responsibility’, because there is a heavy responsibility attached to proof-reading, particularly the proof-reading of bank notes. A typo in a newspaper is quickly gone, a typo in a book hangs around for years but a typo on a bank note? Wow!

But why do we care so much about typos? They don’t really make a difference, do they? Well, apart from the odd clerical error, like the company flotation that priced 610,000 shares at one yen each, rather than the other way round, and cost the company over $200m. Glup!

Like myopia, typos are a problem caused by our literary tradition. Nobody would have to worry about them if we still passed on our stories by word of mouth. Take the Native Americans, for example. They don’t have issues with typos. Tipis yes, typos no.

The trouble is that, as a species, we are programmed to look for flaws in those we don’t know and love and, like an ill-considered tweet about a royal baby, we pounce on a typo as a sign of a deeper-rooted malaise. Leave an ‘i’ out of ‘responsibility’ today and tomorrow you’ll be leaving the country’s bank vaults unlocked. So they’re best avoided. But how?

Typos mostly happen when the writer proof-reads their own copy. Once you’ve written something, your brain looks for what you thought you were writing, rather than what you’ve actually written. So the best way to avoid them is to run your copy past another pair of eyes. Four hundred million pairs is perhaps going too far but…