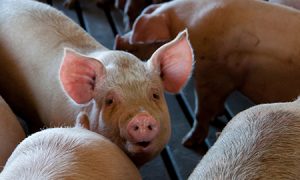 I’ve been toying with the idea of becoming a Buddhist. Well, why not? You’ve only got one life. It fits with my recent efforts to recondition myself off meat – a campaign that was nearly derailed at the end of week one when I inadvertently won a gammon in a raffle.

I know this will probably divide the audience – no-one likes a raffle winner – but I’ve decided that if I can reduce my meat intake by 20 per cent it will have a threefold benefit. 1. One-fifth of the damage caused to the environment in order to keep me in curry, burgers and sausages will be avoided; 2. One-fifth of the beautiful creatures that bite the dust in my name will be spared; 3. I will feel 20 per cent more healthy and energetic.

So I’ve begun by cutting out the processed ham and the pork pies at lunch time and I’ve felt no loss. The gammon, on the other hand, I couldn’t bring myself to waste. It’s funny, I never win raffles but I guess I should have seen this one coming because a) I only saw two other people buy a ticket and b) it was a meat raffle.

The word raffle came into English in the 14th century but it has been largely replaced by the word lottery, except in church halls and village fetes. Lottery has a much bigger feel to it, doesn’t it? You never hear of anyone winning a million pounds in a raffle, do you? Or saying, “I’ve won the raffle but I won’t let it change my life.” And on the flip side, there would probably be a few raised eyebrows if they replaced the Euromillions jackpot with a string of sausages. I mean, think of all the begging letters. Where would you draw the line?

I wanted to be able to tell you how many raffle tickets are sold every year – must be hundreds at least – but no-one seems to have recorded that statistic. What I did discover, which you may find useful, is that a raffle provides a handy loophole in the licensing laws. Because, while you need a license to sell alcohol, you don’t need one to give it away as a prize. You can work out the rest. I’m not a lawyer, by the way, so don’t blame me if it backfires and you end up in prison because I’ve missed something.

The custom of raising money by ‘raffling off’ prizes began in the 18th century. Originally a raffle was a dice game, which may have got its name from a German word for snatching up your winnings. The details are vague. Try Googling ‘the history of raffles’ and you get the history of Raffles Hotel, for which I only have myself to blame, since I seem to remember writing it back when I was editing the customer magazine for that colonial landmark in Singapore. If only I’d had the foresight to throw in something about raffle tickets, I could have got this written a lot quicker.

It’s not an uninteresting history. As well as giving the world the Singapore Sling, the hotel was named after Sir Thomas Stamford Raffles, a colonial governor who, in 1819, founded Singapore on behalf of the British East India Company. You can’t help thinking that the Singapurans who’d been living there for years must have thought they’d already founded it and it didn’t really need founding again, but then along came Raffles to set them straight and snatch up his winnings. It’s a bit like Google claiming to have founded Kent.

The other thing about raffles is that they never seem to sell one ticket at a time any more. You always have to buy a strip. But because everybody buys a minimum of one strip, it doesn’t improve your odds. They might as well sell everyone one ticket for the price of a strip and save 80 per cent of the trees.

See, I’m getting the hang of this Buddhist thing.