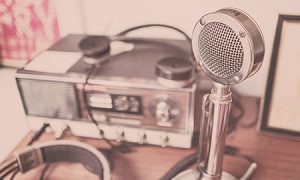 Today is Local Radio Day. Did you know that? You would if you listened to local radio. This week I’ve had the privilege of being invited onto two local community radio stations: Surrey Hills Radio, which broadcasts via the internet; and Susy Radio, which you can listen to online or via the traditional method of tuning in on 103.4FM. I came away from both smiling.

Radio is brilliant. Nothing can match it for soul. For a hundred years, radio has been pouring golden words into our ears, making us laugh, learn, think, dance, cry and shout. And it continues to do so, without parallel.

They say things move fast in this digital age, but it’s been about 25 years since we all started getting the internet and what has changed really? Information moves faster, sure, and in better quality, but genuinely life-changing inventions? Umm…

The digital age has been all about refining the breakthroughs of the radio age. Let’s go back 100 years. After the initial dabblings of Marconi et al around the turn of the century, radio took off after World War I and became so rapidly ubiquitous, it must have been breathtaking. People were tuning in to the first radio sports broadcasts, entertainment shows and news bulletins as early as 1920. How were they listening? On crystal sets mostly, which were so simple that many listeners built their own.

Imagine having to build your own iPhone.

The sense of connectedness must have been thrilling. It was the original worldwide web. At the same time, commercial flight was evolving and radio was a key component. In fact, up until the early 60s, aircraft used commercial AM radio stations to work out where they were.

Then came television, facilitated by the invention of FM radio. Within 15 years of the launch of the first commercial radio station, you could listen to music in your car, catch a flight to the other side of the world and watch moving pictures of live events on a box in your living room. All thanks to radio.

Or wireless, as they called it in those days, short for ‘wireless telegraphy’, ie telegraphy that sent messages through the air, rather than down a wire. The word ‘radio’, from the Latin ‘radius’ (a beam), started to be used among scientists in the 19th century as they investigated the technology but it played second fiddle to ‘wireless’ in the popular vernacular until after WWII. As a youth, growing up several decades after the war, I was always baffled as to why my parents and grandparents called the radio a wireless when there was clearly a wire coming out of the back of it with a plug on the end. Now I know.

While radio has embraced digital technology and spawned new media, such as the podcast, digital technology has not changed radio. It can’t. Radio’s strength is its limitations. Rather like books, radio has a simplicity and soul that fancy TV, film and the internet can only dream of. It’s that voice coming over the air, close, intimate, comforting. Just the two of you. And the eyes play no part in the relationship. It’s all ears and imagination.

A few years ago, in a fit of public-spiritedness (and because I love radio), I did a couple of years on hospital radio. It wasn’t as glamorous as you might think (no, not even that glamorous). A big part of the job was going round the wards collecting requests. This is a perilous task.

Firstly, you have to be careful who you approach. People with severe urinary tract infections, for example, tend not to be interested in trying to think of their favourite tune. Secondly, you can very quickly become embroiled in the whole caring bit if you’re not careful. We were instructed not to move the patients, administer painkillers or carry out major surgery, but if I found their bedside radio wasn’t working, it seemed logical to me to swap it with someone else’s. Someone with a urinary tract infection, for example.

How was I to know that pulling the radio connection out of the wall triggered the nurse call button? So that was the third danger: annoying the nurses. And then there was the forbidden request list. You know, Stairway to Heaven, Died In Your Arms Tonight, Another One bites the Dust… all those hospital radio no-nos. It was a minefield.

I never looked forward to going. I always came away feeling uplifted. It might have been the gas and air, of course, but I think it was the power of radio.