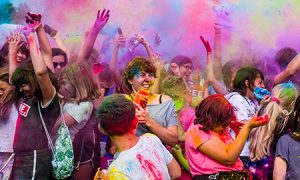 What’s Freddie Mercury got to do with the Rugby World Cup? I’ll tell you.

Let’s begin with a coincidence: that being that on a day of worldwide protests against climate change, the Rugby World Cup has kicked off in Japan. Why is that a coincidence? Because rugby scrums contribute more to the degradation of the planet’s atmosphere than just about any other feature of sport you care to mention. And that includes Nigel Farage playing chess.

I know because I’ve been there. When I was small, I joined a school where rugby was the winter sport. Because my brother preceded me and he played hooker, I was ordered to play hooker. For those of you who don’t like rugby and refuse to take any interest in it, the hooker is… no, listen… the hooker is the player in the very heart of the scrum, whose job it is to hook the ball back with his foot (or feet if he still has both intact) after it’s been put in by the scrum half.

Once you get past the hilarious double entendre, you’ll find there is nothing sexy whatsoever about hookers. In my case the job entailed dangling like a martyr from the shoulders of the two ‘props’ on either side of me and flailing at the ball while having my skeleton realigned like the plates of Pangea by the mindless shoving of two packs of overfed early developers behind and in front of me and being punched in the face by the opposing front row.

Fortunately, the coaches spotted something in my frail physique and natural aversion to physical combat and moved me to fly half, the playmaker position. I never looked back – apart from when I was being chased by a prop. I found it gave me more speed to look into the bloodshot eyes of the behemoth who was trying to kill me.

My friend Dave was a prop. He was adept at climbing trees, tunnelling, lifting very heavy weights and nicking his dad’s whisky – a sort of cross between an orang-utan, a giant earthworm and Oliver Reed. He would have been the archetypal prop had his shoulder not developed a habit of popping out every time he put his hand up in French – which admittedly wasn’t often.

So I escaped, but not unscarred by the experience. Because the front row of a scrum is a traumatising place. It’s like a man-made sewer. Yes, I know sewer’s are all man-made but I mean a sewer made of men, not by men – a dark, smelly tunnel of dank, steaming almosthumanity.

But it is, at least, the source of a word that has come to be used far beyond the fetid confines of the rugby field. There have been many scrums around the world today, for example, as throngs of people have gathered to rebel against extinction. ‘Scrum’ came into the English language as late as 1888, when the game of rugby was in the process of being codified. The official term was ‘scrummage’, an alteration of ‘scrimmage’ (still used in American Football), which had been around since the 1400s as a derivation of the word ‘skirmish’.

Interestingly, skirmish is itself derived from the French ‘escarmouche’, which in turn comes from the Italian ‘scaramuccia’, hence Scaramouche, the villainous medieval clown to whom Freddie Mercury compared himself in Bohemian Rhapsody, while posing the question “Will you do the fandango?” – literally a Spanish dance but in this case a metaphor that conjures the image of a man being hanged. Or trying to hook the ball back in the middle of a scrum.