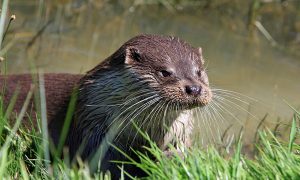 It’s hard to say this when there are otters swimming down your street and your living room’s knee deep in sewage but we ought to be grateful for the rain. It’s a wet planet we live on – 71% of its surface is covered in water (probably more like 72% at the moment) – and that is what makes it our home.

We are wet. More than 50% of the human body is water and if we don’t drink the stuff for three days we die. Simple as that. We wouldn’t last long on Mars.

The reason I’m telling you all this stuff you probably already know is because of the word dishevelled. I’ll explain.

Dishevelled is one of those words that suggests there ought to be an opposite – ‘shevelled’, or perhaps ‘hevelled’ – just as ‘disapproving’ has ‘approving’ – but words aren’t always formed that way. In the case of dishevelled, the word was coined by the French: ‘deschevele’, which literally meant de-haired (chevel meaning hair in Old French), or shaven-headed to you and me. They didn’t bother with a word for ‘haired’ because they didn’t need to; that was the default.

If there ever was a word ‘shevelled’ in circulation (and there seems to be some evidence of a few mavericks trying to use it around the time King Charles I was having his hairdo permanently rearranged), it was a derivation of ‘dishevelled’, rather than the other way round.

There are lots of words like this in the English language (see Whelm). Back in 1995, The New Yorker published an article entitled How I Met My Wife, by an enigmatic writer and frog collector called Jack Winter. It was a short story, peppered with words like ‘chalant’, ‘descript’ and ‘shevelled’ and phrases like ‘there were two ways about it’ and ‘it would be skin off my nose’. To be honest, it becomes hard work after the first few sentences (Hey! Who shouted, “Pot and kettle”?) but the point is well made.

One word that doesn’t feature in the story is ‘undate’ – the hypothetical opposite of ‘inundate’. ‘Undate’ doesn’t exist in English – unless someone, somewhere is using it as a slang term meaning to stop going out with someone. Just as flammable and inflammable mean the same thing, if there was a proper word to ‘undate’ it would mean the same as ‘inundate’ anyway – to flood or swamp.

Latin scholars among you will know that inundate comes from ‘unda’, meaning ‘wave’, and giving us other words like redundant (literally ‘overflowing’) and undulation, but did you know that the root of the Latin is a Proto-Indo-European word for water and wet, which, when twisted through various tongues, forms the basis of all those Greek-based ‘hydra…’ words (hydrant, hydration, carbohydrate etc), the Latin ‘unda’ words, as well as a bunch of other water-related words like ‘vodka’, ‘whiskey’ and ‘otter’. There’s a joke in there somewhere about mixing your minks.

Did you know that otters have the thickest fur of all mammals? If an otter ever got bored and decided to count its hair, it would find around a million in every square inch of its body. In fact, otters have two layers of fur, one short, one long. They are the epitome of shevelment.