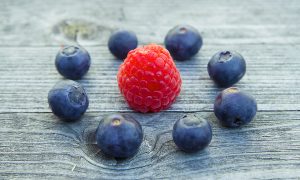 No, that’s not the sound of me trying to think of something to write. It’s a word that’s been in my head all week since sending the last word out to the wrong mailing list (welcome, new readers!). That and something to do with summer fruits, which I’ll come to in a minute.

To err is human. That’s the mantra I’ve been trying to console myself with and every time I chant it I feel a little bit more Neanderthal. Compared to its sophisticated polysyllabic relations, such as erroneous, erratic and aberration, err is some way behind on the evolutionary curve. I started to sound like Rowan Atkinson in that End of the World sketch with Peter Cook. “Will this wind be so mighty as to lay low the mountains of the Earrrrrth?”

If you’ve ever paid attention to what you read here, you’ll have noticed that most words in the English language stem from Latin, Greek, both, or something Germanic. But say you were reading this in 100BC (I know, judging by the age of some of the jokes, it often feels like you are). Wouldn’t you want to know where your words originated?

According to my usual etymological sources (who have been hard to come by lately with the pubs closed), ‘err’ comes from an Old French verb ‘errer’, which itself stemmed from the Latin ‘errare’. Usual story. But we can’t just let the trail stop there, can we? If you were Columbo, you’d turn around in the doorway, touch your forehead and say, “Oh, just one further question, if you don’t mind. Remind me, how did the Romans come by ‘errare’?”

Now I can’t remember an episode of Columbo where that actually happened – not with those precise words anyway – but you get the point. The Romans may have been clever but they didn’t invent speech, any more than the Beatles invented rock’n’roll, so who were the Little Richards of language?

The word ‘err’ gives us a clue. Caveman Ug inadvertently drops a mammoth thigh bone on his toe and as he’s hopping about grunting, his wife points at him, grins and says, “Err.” And we have ourselves the origin of language.

Which brings us back to the familiar expression “To err is human”. Less well known is that this is an abbreviation of the original saying “The ability to say ‘err’ is human”. No other animal on the planet can say ‘err’ and that’s what sets us apart as the dominant species.

Of course, this later developed into the aphorism “To err is human, to forgive divine”, which sounds like it might have been coined by Pope Alexander but was actually the creation of Alexander Pope, the acclaimed 18th century satirical poet. In his poem An Essay on Criticism, he wrote:

Ah ne’er so dire a Thirst of Glory boast,
Nor in the Critick let the Man be lost!
Good-Nature and Good-Sense must ever join;
To err is Humane; to Forgive, Divine.

In other words, “Stop being so bloody self-righteous!”

Wise words. But what’s really topical about the word ‘err’ right now is that it forms the core of the word ‘berry’ and berries are everywhere. Or, at least, I thought they were until my friend Nick opened a meeting on Tuesday with the provocation, “Did you know the raspberry isn’t a berry?”

This annoyed me. I’ve heard the same thing said about the strawberry. It gets my goat. Who says it’s not a berry? Scientists, that’s who. But given that we’ve been calling them berries for over a thousand years, whereas scientists still thought the Moon was made of cheese until 1969, surely any scientific definition should be fitted to the word, rather than the other way round.

Still, I’ve calmed down now. They erred, that’s all. And I forgive them.