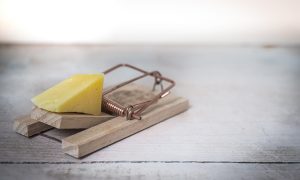 Ever felt like you’ve been caught in a trap? If I recall correctly, I think Elvis did, but I don’t think he meant it literally. For many of us, quarantine and isolation may be the closest we’ll ever feel to being literally TRAPPED, so when I set foot on a golf course the other day for the first time this year, and felt the freedom all around me… where do you suppose I ended up? In a sand trap, of course. And it took me two shots to get out. OK, Jack Nicklaus I am not. Traps do, however, also have the ignominious distinction of being responsible for the premature termination of life, but don’t fall into the trap of thinking all traps are bad. That’s total claptrap.

If you were to ask a group of Trappist Monks (collectively an abomination – look it up), perhaps some would admit to feeling trapped in their chosen profession. Is it technically a pursuit? Maybe more of a calling? Like Avon? But I’m guessing most would tell you that they’re content and understand that their job title is merely a reference to the town of La Trappe in Normandy, France, where the order was first established. They don’t talk much about it though. At least not to me.

The word ‘trap’ first caught our attention back in good Old English as ‘treppe’, meaning to snare or trap (the most obvious interpretation of the word). Across the water, our French and Spanish chums would place a ‘trape’ or a ‘trampa’ when hunting, following in the footsteps of their Dutch and German neighbours, who would hungrily ‘trep’ and ‘trappe’ dinner. These words originally meant a step or stair and it was probably the sense of stepping into or on something that led to the sense of a trap as we know it today, as well as giving us the word trip.

Sticking with the household structure theme, let me open the door to reveal…the trapdoor. This perennial friend of the magician and the persecuted dates back to the late 14th century. The trappe-dore, or door in a floor, was not where you wanted to be in the 19th century as, when combined with neck, rope and gravity, literally made the gallows a death trap for many. Your life really did hinge on it at that moment. Groan – nothing worse than gallows humour.

On a lighter note, I’m sure we’ve all enjoyed a swinging party or two, complete with all the trappings of someone’s success, or some of you may even have enjoyed the trappings of power or wealth yourself. I’m still waiting for my bodyguard and chauffeur. Oh well. These visual accessories, now denoting the grander side of life, were historically more commonly found on horses in the form of ornamental harnesses known as caparisons, from 15th century French caparaçon and Old Spanish caparazon.

Horse-drawn carriages also adopted the name ‘trap’ as a popular mode of transportation before the term ‘pony and trap’ was hijacked by the Cockneys to disparage the quality of the item in question. “Oi mate, your greyhound came last – he’s pony!”

Talking of which, ever been out for a night at the dogs? Greyhound racing (no they don’t have jockeys) is a popular pastime where lightning fast dogs spring forth from their starting traps in pursuit of a lure, as invested spectators, ever hopeful of that big cash payout, cheer them on. Did you hear the one about the greyhound who refused to run unless he was given a tic tac? His owner was arrested for entrapment. In trap mint. In trap. In. Trap. Mint. Oh, forget it. (One more of those and you’re fired – Ed)

After that poor attempt at contriving a joke, I’m picturing your expression as being very similar to mine on the day our mathematics teacher introduced us to the calculation of areas of trapezoids. Wide-eyed disbelief turning quickly to perplexed resignation. I’m still wondering if a trapezoid has anything to do with a circus trapeze act. Anyone?

So, as you can see, you need to be careful out there because traps are all around us. Sand traps, speed traps, starting traps, trapdoors. Mousetraps, traps in your drains, trapshooting (keeps that pesky clay pigeon population in check, I’m told). There’s the parent trap, the Venus fly trap (Suddenly Seymour!) and school quizzes full of trap questions.

Playgrounds still talk of booby traps in hushed giggles and every holiday season you’ll find me settling down with a nice glass of egg nog with my favourite singing family, the Von Trapps!

This week’s word was brought to you by Brian Lees.