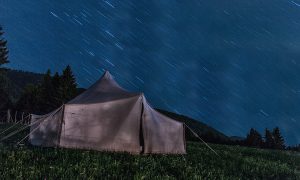 It’s camping season again. The sites and their toilets are open once more (you can almost smell it) and happy campers throughout the UK will be asking the usual questions: Where shall we go? What’s the weather doing? Have we actually got a tent? Is it watertight? What did you do with the pegs? How’s your lumbago? And what’s the correct spelling of canvas?

Well, that all depends, doesn’t it? Do you want to canvass opinion on the question, in which case it’s a double ‘s’? Or do you just want to get hold of some canvas, in which case it’s just the one? But how did two such similar looking words come to have such vastly different meanings?

Canvas is a fantastically versatile material for sleeping under, painting on, making sails with etc. Canvass is a quaint old verb meaning ‘to solicit opinion’, which only comes out at Election time.

How could they possibly be connected, you may ask? OK, I’m in a hurry, so here’s how. The verb ‘canvass’ originated from the practice of sifting seeds through a piece of cloth. You know those scenes in old period dramas where a group of agricultural types are throwing and catching grain in a large sheet, like rescuers catching a jumper from a burning building? (I mean someone who jumps, not a pullover). They’re separating the wheat from the chaff, so to speak, and guess what material they’re using. Yep, canvas.

So the verb ‘to canvass’ originally meant ‘to sift through canvas’ – in exactly the same way as ‘to sieve’ means ‘to sift through a sieve’. Unlike ‘sieve’ and ‘sieve’, however, someone, whether deliberately or by accident, created a distinction between the verb and the noun by adding an extra ‘s’ to the end. The English language is full of these subtle distinctions. Practise or practice? (Quick tip: think ‘advise’ and ‘advice’. Or move to America and stop worrying about it).

From that ‘sifting’ definition, it’s easy to see how canvass evolved to meanings of sorting, examining, testing and hence testing opinion. The evolution comes full circle when the pollsters canvass opinion about cannabis. Why? Because the words ‘canvas’ and ‘canvass’ come from ‘cannabis’, the Latin word for the plants from which canvas (hemp) and marijuana are made. Far out, man!

Before you go setting light to your tent in the hope of taking your camping experience to new highs, however, it’s worth knowing two things: 1, hemp and marijuana come from different strains of the cannabis plant; and 2, you’re more likely to, shall we say, ‘relieve constipation’ from ingesting hemp than get high – not desirable on a camping trip.