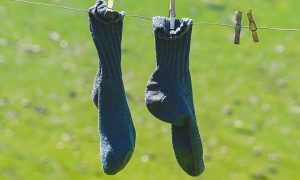 I’ve often extolled the virtues of the English language and its ability to provide precisely the right word for any given situation but, in truth, this isn’t entirely the case. Despite centuries of evolution, of growing and morphing to reflect the trends of any given time, there are still gaps – vocabularial holes that English alone has failed (or rather, not bothered) to plug.

Sure, we can fill those gaps by knitting together a number of words, but that leaves your sentences looking like a darned sock. For that seamless repair, we prefer to borrow from other languages: sangfroid, zeitgeist, chutzpah, penchant.

We call these loanwords and the bank we tend to draw from more often than any other is French. Pourquoi pas? There are lots of things to love about France: croissants, philosophy, depressing novels, two-lane motorways where people pull in again after overtaking… the country and its culture just have a certain je ne sais quoi, especially when it comes to words.

So much so that we’ve left our own language incomplete just so we can have carte blanche to season it with phrases like au fait, enfant terrible and déjà vu. However, these are not single words, perfectly cut to fit the holes in the English language. They’re more darned socks, albeit with finer stitches.

Penchant is a genuinely necessary loanword for which we have no better alternative. The dictionary definition is ‘a strong or habitual liking for something’ – seven words where one will do. That’s what I call a deal. The closest we come to a one-word equivalent is ‘predilection’ but come on! Try saying that in Screwfix and see where it gets you.

‘Liking’, ‘leaning’ and ‘taste’ are pallid by comparison, while ‘hankering’ and the quirky ‘yen’ go a bit too far – the latter having originally meant ‘a strong desire for opium’. Addiction, in other words.

So our penchant for penchant is entirely justified. The only drawback is that it’s impossible to say it without sounding like you’re effecting an exaggerated French accent, like Barry Davies commentating on the 1982 World Cup. Platini… Battiston… Tigana… Janvion… Giresse… Actually, it’s rather gorgeous, isn’t it? And there’s usually a goal at the end if it. Or a massive German goalkeeper with violent intent.

But I digress. Our penchant for French phrases probably stems from the days when that was the international language of diplomacy, and dilettantes used to swan about the corridors of power shouting things like ‘attaché’ and ‘hors de combat’ and ‘fait accompli’. The clichés stuck, the rest crumbled away and today, rather than cementing alliances, we tend to use French as a mere paint box from which to add a splash of colour to our own lingo.

Such is life with languages. Like empires, they rise and fall. Who knows, maybe one day all this will be Mandarin.