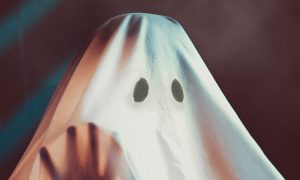 It’s come to my attention that some of you think Brian, who fills in for me here occasionally, is a figment of my imagination – a spirit, a wraith, an eidolon, a kelpie… or just some bloke I made up to keep myself company.

So, to prove that he is real flesh and blood and not just some sprite conjured from the misty marshland of my mind, I asked Brian to write this week’s word and guess what he came back with…

Who you gonna call?

Folks have been trying to bust ghosts since way before Dr Venkman was slimed by the aptly named Slimer. Marley spooked Scrooge, Myrtle did nothing for Hogwarts plumbing and I for one won’t be drawing a bath in the Overlook Hotel any time soon!

The word ‘ghost’ has been haunting us since as far back as Ancient Greek days, when phantom soldiers on horseback from the battle of Marathon could be heard echoing all the way to nearby Thermopylae, and ever since then we’ve been inundated with spectral occurrences in the form of smells, gusts of wind, strange lights, moving objects, eerie music and apparitions.

Not all ghosts are bad, though. Casper easily measured up to his ‘friendly’ moniker and Scooby and co. made a surprisingly successful career out of debunking them.

“And I’d have gotten away with it too if it weren’t for you pesky kids!”

Strangely, the most famous scene in the movie Ghost happened before he was a ghost. Still, that probably won’t deter some from clamouring for a ghostly visit while they idly throw clay pots in their warehouse apartments, dressed only in sleeveless white cotton bed shirts.

Like ghosts themselves, the word ghost crops up where and when you least expect it. What is the ghost in the machine? Is that why my vacuum cleaner is making a funny noise? Why do we give up the ghost? Are ghost peppers just the disembodied souls of dead peppers? Is there even a ghost of a chance of United returning to their glory days? (Careful – Ed)

Declining dynasties aside, where did this shadowy, spooky word hail from? It appears to have apparated as early as the late 14th Century as ‘geist’ in German, ‘geest’ in Dutch and ‘gest’ in Old Saxon. With the addition and prepend of the Germanic word ‘poltern’, meaning ‘to make sound’, we can see why Carole Anne and family opted to relocate!

Olde English also gave us ‘gast’ and hence our ability to be aghast, although the ‘gh’ arrived later in 15th Century Netherlands as ‘gheest’. It’s worth noting that facial expressions denoting being aghast resemble those worn by people who ‘look like they’ve seen a ghost’.

Talking of, my school chum Ian once claimed to have seen a floating head above a hedge as we gathered around the village green seesaw (as we often did). Hindsight would suggest it was likely just a grumpy homeowner (literally Mr Angry of Purley); nevertheless, it was sufficient to give this group of slightly tipsy teens the heebie-jeebies and bring a premature end to our nocturnal methane combustion experiments. We did live to, erm… fight… another day.

You may by now have noticed that words beginning with ‘gh’ like ghetto, ghee, Ghana, gherkin, ghastly and ghost utilise the silent ‘h’. I once made up a joke about the silent ‘p’ and swimming pools, but I’ll spare you. To tangent further, does anyone else find it cacophonic when our American chums apply the silent ‘h’ in the word ‘herb’? To me that’s up there with ‘aluminium’ and ‘aluminum’!

So many ghostly synonyms abound in the paranormal world, I’m not sure I’d be able to distinguish between a spirit, spectre, ghoul, apparition, wraith or phantom should I meet one. For those seeking to evade encounters entirely, to ‘ghost someone’ has recently replaced the established excommunication punishment of being ‘sent to Coventry’, which I’m sure is a disappointment to all the hard working folk at the West Midlands Tourist Board.

The music industry has not shied away from ghost references either. Songs like Ghost Dancing, Ghost Town, Ghost Riders in the Sky (do ghost riders ride night-mares?) all still haunt me, but the ghost with the most, the song that still visits me in melancholy playlists to this day, is the simply titled track Ghosts by New Wave 80s songsters, Japan, in all its baritone, minimalistic, synthpop, David Sylvian glory.

On the day the music died, Don McLean revealed he was an admirer of the Father, Son and Holy Ghost, the last of whom wasn’t really a ghost but a spirit, from the Latin ‘spiritus’, meaning breath. Anyway, they all caught the last train for the coast so they’re probably still waiting at a signal outside Balcombe.

I should get going too, but before I do, I’d like to thank Tim and the spirited team at Balance Media for the opportunity to guest write, or ghost write? What’s the difference between a guest and a ghost? Could it be that one’s invited and the other isn’t? Would you call an uninvited guest a ghost? Would you label an apparition that a medium willingly summoned as an invited ghost, a guest? I was a medium for a while, but I’ve gained a few pounds.

Regardless, I hope this bit of ghost writing will prove my existence, as well as giving Tim a week off – which, by the way, is still the most common excuse for skipping primary school in Scotland. (You’re fired – Ed)