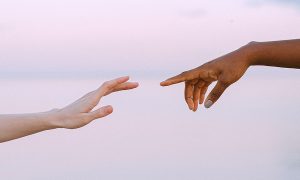 Earlier this week I received an email from a cleaning company owner, saying he was “reaching out” to me to help sort out the health and safety of my working environment. Putting aside the subtle insinuation that I don’t keep a clean home, I was deeply moved by his use of the term “reaching out”.

It reminded me that reach is a synonym for vomit. And if you’ve ever seen a cat bringing up a frog, you’ll understand why. It’s body elongates and its neck extends to impossible lengths, reminiscent of a giraffe reaching for the very top twig of an acacia tree. Only wetter.

Anyway, I’d rather he’d just said “getting in touch” or something, because it sent my imagination down a rabbit hole that I really didn’t have the time to explore. But then, I thought, where does “getting in touch” come from? Presumably that was a nauseating cliché once upon a time, back in the days when the only people who reached out were the Four Tops. In these non-contact days, I suppose it’s inevitable that the trend is to reach rather than touch, but then why do we reach out if not to make contact?

Did you know, by the way, that the past tense of reach used to be raught, just as teach has taught? Shakespeare uses the word ‘o’er-raught’ in Hamlet, meaning over-reached, as in overtook. Not to be confused with ‘overwrought’, which means overworked, as in the way a blacksmith works iron. Anyway, you don’t have to worry about that any more because ‘raught’ died out with farthingales and bubonic plague.

Normally ‘reach’ conjures up more simple images: a stretch of water, a boxer’s arm, an S Club 7 video, a birthday (no presents please… oh go on then). It has that dual sense of both extension and attainment (I’d settle for either at my age) and in that sense I guess it’s an appropriate choice of words for someone trying to sell their services.

But then I imagined myself reaching back, like Michelangelo’s painting of the Creation of Adam, and in a flash we were skipping over a pine-fresh hillside to the strains of Julie Andrews and he was eradicating germs left, right and centre with a wave of his magic cleaning wand. This is how dangerous an overused cliché can be. It’s worse than drugs. Don’t do it, kids.