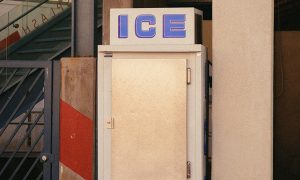 The quest for artificial refrigeration had been a long and deadly one. In 1755 a professor at Edinburgh University, William Cullen, had blazed the trail (or whatever the icy equivalent is) with a primitive device that made coldness. Strangely, though, he found little demand for it in his native Scotland and the technology was put on ice, as it were, for fifty years.

The 1900s, though, saw lots of attempts to perfect Cullen’s principle using various toxic gases, which brought increasing success at cooling stuff but tended to leak and kill everybody in the room. This was deemed unacceptable among the well-to-do party-throwing classes, who preferred to harvest ice in the time honoured way until an artificial alternative could be found that didn’t wipe out all their guests.

By the 1920s they had it and the decade saw a rapid evolution in refrigeration technology on a par with the IT evolution that is taking place today. But it wasn’t just fridges that became cool in the 1920s. Other innovations wowing the world included sunglasses, cars, traffic lights, passenger flights, telephones, radio, TV, cinema, the 35mm camera, the vacuum cleaner, electric toaster, electric razor and washing machine.

Had someone presented them with a device for playing word games, sending silly pictures and detecting that there’s no-one near you with the Covid app, you wonder if they’d have been that impressed.

Such is innovation. Just as the power and speed of computers doubles every couple of years (according to Moore’s Law), so the steps of progress seem to become exponentially smaller. While the innovations of the 1920s helped us to travel further afield, those of today encourage us to go nowhere. We’re in danger of disappearing down a rabbit hole.

The Book of Ecclesiastes gave us the immortal contention that “There is no new thing under the sun.” That’s not strictly true, of course. There are new jobs being created all the time. There are even people who have the job of coming up with new job titles. And they’re doing a great job. Today there are more people with ‘innovation’ in their job title than there are ideas in the world.

Their job is to recognise that innovation isn’t necessarily about doing new things, it’s about doing old things in new ways. The wheel, for example. I mean, does it have to be round?