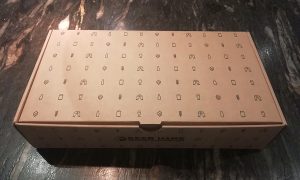 Isn’t cardboard brilliant! Strong, pliable, lightweight, biodegradable, tactile and aesthetically pleasing. It even sounds good when you slide one piece over another. All these attributes add up to what online retailers call ‘the unboxing experience’ – the pleasure of opening a cardboard box.

The unboxing experience can often outweigh the impact of the contents. For example, I recently bought some water lily food pellets online. They arrived in a very neat, simple cardboard box, which I spent several minutes opening and closing during my tea break, while the pellets barely raised my pulse.

We all know that paper was invented by the Chinese but who, you may ask, invented cardboard? It was the Chinese again, simply by making paper a bit thicker. But the packaging potential was first exploited in England in the early 19th century, when cut rectangles of cardboard were fixed together to make lightweight boxes.

The 19th century saw a keen interest in cardboard, culminating in the invention of both corrugated cardboard and the pre-cut cardboard box. And you think the digital revolution is mind-blowing.

The concept of the box itself, of course, predates cardboard by years. In fact, Boxing Day predates the cardboard box by eight years, taking its name not from the fights that traditionally broke out within families strained to breaking point by the pressure of drinking their bodyweight in sherry, but from the charitable distribution of the church Christmas Box, which wasn’t made of cardboard but wood.

For centuries boxes were made of wood, metal, ivory and other rigid but workable materials. Indeed, the word ‘box’ derives from the box tree, whose wood was used by the Greeks to make boxes. They called it ‘pyxos’, which became ‘buxus’ in Latin and later evolved into ‘box’, ‘buxom’ and ‘Barbara Windsor’ (RIP).

And what a fantastic word ‘box’ is. The notion it gives us of a fixed enclosure has spawned all sorts of modern concepts, such as the penalty box, boxcar, box seat, box set, box kick, box ticking exercises… as well as the thing we used to call a television. There’s also a place in Wiltshire called Box. A friend of mine runs the Post Office there.

Coincidentally, I took delivery yesterday of a very pleasing box of canned beers from a company called Beer Hawk. I’ve opened and closed it several times. Joyous! I’ve no idea who sent it, though. Maybe it was Beer Hawk themselves, mistaking me for an influencer. Huh! As if I’d have any interest in writing about somebody’s beer service in the lame hope that they might send me some more!