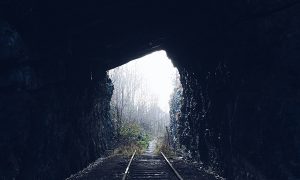 Thirty years and a month prior to our eventual exit from the EU, engineers from Britain and France were basking in the satisfied glow of having joined hands 75m below the seabed, somewhere around the middle of the English Channel, or La Manche, depending on which side you were drilling from.

Had either team deviated in their direction by 5m or more, they would have dug on past each other like worms in the night, but they didn’t. Somehow they kept tabs on where they were going, both vertically and horizontally, and after a total of 37.9km of drilling under the sea, they broke through to shake hands and embrace and shrug and laugh about Waterloo and Agincourt, and to celebrate the creation of the world’s longest undersea tunnel.

Tunnels don’t tend to get the acclaim they deserve. They don’t dominate the skyline like a Shard or a Burj Khalifa, nor do they cut a dash like a Taj Mahal or an Eiffel Tower. They are, for the most part, dark. Yet as feats of engineering go, they knock those puffed up architectural pompadours into a cocked hat.

One tunnel that does attract a lot of visitors is the Guoliang Tunnel in China. Guoliang is a remote village in the Taihang Mountains, which until 1977 was connected to the outside world only by a treacherously steep and slippery staircase carved into a vertical rock face. Tired of taking their life in their hands every time they needed to pop out for a pint of milk, the villagers petitioned the local authority to make them a tunnel through the mountain. The local authority pretended they couldn’t hear them, so the villagers decided to do it themselves.

DIY tunnelling is not to be recommended, as you’ll know if you’ve watched The Great Escape. There’s more to it than just bashing a hole in the ground. You’ve got to shift all that rubble out of your trousers without the guards seeing, for a start. Nevertheless, 13 of Guoliang’s sturdiest young grafters set to work, using sledgehammers and iron chisels and the occasional stick of dynamite, and in five years they broke through.

It wasn’t the first time humans had made tunnels without powered machinery. They did it in Persia over 3,000 years ago, and the Greeks and Romans had an aptitude for taking the direct route too, but they had a lot more manpower and the results weren’t as picturesque.

The Guoliang Tunnel cuts through the outer edge of the mountain for three quarters of a mile, like a running stitch, breaking through the rock face at regular intervals so you can look out across the terrain and take note of the terrifying drop beneath you. It’s spectacular. The tunnel succeeded in opening up access to and from Guoliang, so much so, in fact, that today the place is in danger of being overrun by tourists.

Like all tunnels, it stands as a testament to what we can achieve when we’re at our most resourceful. And, like most tunnels, there is light at the end.