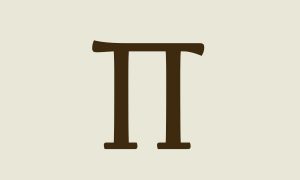 This Sunday – in case you need reminding – is one of the most significant days in the calendar. A day when we put selfish issues aside and celebrate one of the great constants in our lives. I’m talking, of course, about Pi Day.

Yep, March 14th, or 3.14 as the Americans write it, has been celebrated as Pi Day since 1988, when American physicist Larry Shaw first suggested it during one of those typical conversations you have with friends about mathematical constants. It also happens to be Albert Einstein’s birthday, and part of the traditional Pi Day celebration is the singing of ‘Happy Birthday, Dear Albert’.

Fortunately, Larry wasn’t so obsessed with the purity of his subject as to overlook the obvious opportunity to celebrate Pi Day with the eating of pies, so there’s your Sunday lunch taken care of. If you want to get really into it, you can plan to eat your Pi Day pie at 1.59pm and 26 seconds. 3.1415926…

We all know pi as this funny little Greek character, π, but until the 1700s there was no simple name or symbol for it. Instead, you had to use the slightly more cumbersome “ratio of a circle’s circumference to its diameter” when doing your maths homework. But everyone knew what it was and that it never changed, regardless of how big or small the circle, and that those decimal places went on for ever.

And that it wasn’t the same as pie.

Pie preceded pi in the English language by several centuries, which probably proves the point that eating is more important than calculating the area of a circle in the hierarchy of needs. Not only did our ancestors use pie to define a fruit or savoury melange topped with a pastry lid, but it was also the name of a bird – the magpie, in fact. That’s where the word ‘piebald’ comes from, originally for a horse with a black and white coat.

Don’t ask why the ‘mag’ was added. It’s International Women’s Week and I don’t want to rock the boat. Oh ok then… ‘Mag’ (short for Margaret) was a term generally used for women, in the way that some people use ‘Doris’ or ‘Sheila’ today. Awful really. And because the bird has a tendency to chatter… oh no, sorry, this is getting worse. You get the gist. Middle Ages. Unenlightened. I’ll leave it there.

The other pie has given us many things: gout, for one. But also expressions like ‘pie-eyed’ and ‘pie in the sky’. The latter was coined by an early 20th century union activist and songwriter called Joe Hill (real name Joel Emmanuel Hägglund), a Swedish-American immigrant who was executed by firing squad in 1916, having been arrested on suspicion of murdering two men. In fact, he had been shot in a love feud. When they asked him if he had any last words, he shouted, “Fire!”

Prior to his somewhat dubious demise, Hill was a renowned Wobbly – the affectionate nickname for a member of the radical labour union, Industrial Workers of the World, which still exists today. He campaigned for workers’ rights in America and wrote parodies of well known hymns, with words changed to reflect the workers’ plight.

He chose hymns because a tactic of the mine owners, against whom he and his comrades campaigned, was to hire the local Salvation Army band to drown out the cries of the protesters. Hill figured that if he wrote his protest songs to the same tunes that the bands played, they wouldn’t be drowned out, they’d be accompanied. You have to admit that’s clever.

One of Hill’s most famous compositions was ‘The Preacher and the Slave’, a parody of the hymn ‘In the Sweet By-and-By’ (as sung here by Dolly Parton), in which he satirised the patronising put-downs of starving workers by replacing the traditional chorus with:

You will eat, bye and bye
In that glorious land above the sky
Work and pray, live on hay
You’ll get pie in the sky when you die