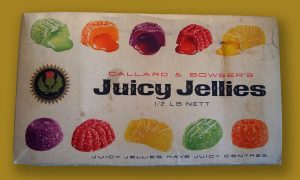 I was reading the label on a bag of basmati rice the other night, just to pass the time as I was gliding up the escalator at Sainsbury’s, when I noticed that it said ‘Net weight: 5kg e’. I’m sure that when I was a boy, the word was written ‘nett’, not ‘net’, so I started rummaging through my bags, looking at labels to see if any of them were still spelling it the old-fashioned way.

They weren’t. In fact, when I got home and looked up images of old food packaging on the internet (it was a Wednesday night), it appeared that none of them ever did. Not even in Netto. Had I dreamed it? Eventually I chanced upon a picture of an ancient tin of Weekly Assortment – “Buttered Almonds, Walnuts & Brazils, Fruit-Centred Varieties, Salines etc. 1/4lb Nett”. Hah!

This sort of thing is important to me and I’ll tell you why. In a minute. First, a little more on dry goods. The 5kg bag of basmati rice represents excellent value and, apart from its spelling of ‘net’, is a throwback to the good old days when you bought your groceries in bulk and stored them in jars.

The same cannot be said for the spices, which don’t even bother with the word ‘nett’ or ‘net’ at all but just have the ‘e’ symbol. Apparently this is an EU thing and stands for ‘estimated’. Or ‘estimé’, or ‘estimado’, or ‘geschätzt’. In case you were wondering.

The spice section is a poisoned chalice. It looks enticing – all those neat little jars with their exotic contents – but when you get them home you’re faced with an impossible decision. Do you tip the contents of the little jar you’ve bought into your own little jar, which came with your rustic wooden spice rack kit and looks pretty? Or do you give up on the rustic jar and just stock your rack with the new jars?

The former seems rather pointless on a practical level, added to which the old jar is never quite big enough to take all the contents of the new jar, so you end up having to keep both. But the latter compromises your French farmhouse interior kitchen styling and plays into the hands of the supermarkets, which are clearly bent on some subversive plot to colonise domestic spice racks with their own branded jars, like some overaggressive strain of wasp.

No wonder more and more people are suffering from anxiety and paranoia.

Next to this kind of existential threat, the spelling of ‘net’ may well seem trivial. Fair enough, there’s no danger of confusing the nett weight of a bag of rice with the net you drag across the seabed to catch shrimp, or the net you hang between goalposts to catch the ball as Paul Pogba dinks it deftly past the AC Milan goalkeeper. So you might as well drop the second ‘t’ and save yourself a few seconds over the course of your life. I get that.

But confusion does arise when you speculate that “Pogba probably netted a cool 250 grand for that moment of magic”, because it conjures up images of the mercurial genius sporting a pith helmet and butterfly net and going in search of his wages, when what you really mean is he earned that after deductions.

Or do you? You see, nobody knows any more. Lovely, archaic looking word though it is, related to the French ‘nettoyer’ – to clean or tidy – and to ‘neat’, as in Scotch, ‘nett’, it seems, has been bullied out of existence. And if you tolerate this, then your spice jars will be next.