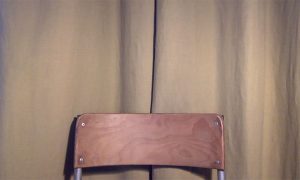 On Monday I was packing up old toner cartridges for recycling and one of the little sods, despite having declared itself empty (long before emitting anything like the 400 or so pages worth of ink that it claimed to), managed to muster a final squirt of magenta to smudge on my jumper. That’s the reward I get for being planet conscious.

Anyway, I went to get the Vanish out and, guess what, it had disappeared. One day it was there under the sink, the next it had gone, nowhere to be seen. “Hah,” I thought to myself. “It does exactly what it says on the pot.”

Of course, that’s not really why it’s called Vanish – unlike Vanishing Cream, which is so called because it vanishes into the skin, but not before you’ve taken it out of the pot. I learnt this by searching up “history of vanishing”. There’s not a lot on the subject. I can offer you plenty on the “history of varnishing” but that might take the gloss off it.

Take the gloss… Please yourselves.

What I can tell you is that the word ‘vanish’ came into the English language around 1300, when Edward I was hammering the Scots and vice versa. What, I wonder, could have happened to make them come up with such a word?

“Where’s Robert the Bruce?”
“He’s gone, sire. Vanished.”
“What?”
“Vanished, sire. Disappeared into thin air, sire.”
“Really? I told you not to take your eyes off him.”
“We didn’t, sire. He just vanished, sire.”
“Hmm. What is this word you keep using? From whence didst thou procure’t?”
“What, vanish? Oh, it just popped into my head, sire.”

Seems unlikely, doesn’t it? Even back then, a sudden disappearance was more likely to lead to the assumption that the missing person had wandered into a cave to watch spiders than that they had melted into thin air.

If the word had been coined today, with all the clever technology we have, you could understand it. Things can be made to vanish all the time. For example, I’ve just created a Zoom background, which is a picture of me against my usual Zoom background, so I can slip away from group meetings and people think I’m still there. I’ve had fun making myself vanish and reappear, but that’s not sorcery, it’s just a camera trick.

Of course, ‘vanish’ isn’t the only example of words for things that are figments of our imagination. We have lots: ghost, angel, free trade deal… but while we might believe in ghosts and angels, and therefore make words for them, we all know that objects don’t just disappear into thin air. Not even socks. So why would anyone have come up with a word for it. It’s like coming up with a word for the Sun not rising in the morning.

Perhaps it’s the physical impossibility that makes the idea of vanishing so compelling and thus worthy of its own word. If David Copperfield (the magician) conjured up a ghost or an angel, we’d probably just say, “Oh, ok, so they do exist. Nice one,” whereas make the Statue of Liberty disappear and we go, “Wow! That’s quite literally unbelievable!”

Given that David Copperfield (the magician) hasn’t been in my kitchen – not that I’ve noticed anyway – the mystery remains. As does the stain, dammit.