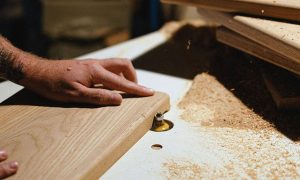 If you’ve ever tried your hand at fine cabinet making, you’ll be familiar with the router. It’s a clever electrical tool for cutting very uniform, patterned, grooves in wood. I mention this because my friend Nick recently took delivery of one by mistake – you could say it had been misrouted – and, being a drummer, he immediately set about demolishing his shed.

That evening, being a drummer, he entered into an argument with another friend, Gary, as to how it should be pronounced. “It’s definitely router,” said Gary. “I disagree,” said Nick. “I’m pretty sure it’s router.” They called me to adjudicate and I promised I’d look into it, just as soon as I’d finished my scone.

OK, let’s stop being silly. We all know it’s pronounced router, otherwise how else would we distinguish it from that thing you have to shout at every time your wifi goes down? Unless, of course, we’re American and pronounce router router anyway, which I presume Americans do, because they pronounce route ‘rout’ – unless they happen to be getting their kicks on it.

And that’s a strange anomaly when you think about it. Given that Route 66became an established standard in the Great American Songbook almost from the moment Bobby Troup (pronounced Troup) wrote it in 1946, you would think that would be enough to educate the nation on the correct pronunciation of ‘route’. Nat King Cole didn’t sing, “Get your kicks on Rout 66,” did he? So why say it? It’s illogical, Captain.

We need to get to the root of the matter – and that, as luck would have it, is precisely where the router originates. In fact, the word rout has two meanings. One is the definition we’re most familiar with: to drive from the battlefield in a disorderly retreat, used in modern sporting parlance interchangeably with ‘trounce’, ‘thrash’, ‘slaughter’, ‘dismantle’, ‘beat 2-0 at the Etihad… again’. The other is to poke about, like a pig rooting (routing) for truffles.

It’s from the latter that the woodworking term derives. A router doesn’t drive wood from the groove in a disorderly manner, it pokes it out neatly like the nose of a pig. Well, sort of. So maybe Nick was right, despite being a drummer. If a router routs in the sense of root, maybe it should be pronounced router after all.

I hope that’s settled the argument.