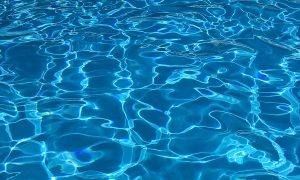 By popular request (well, he asked nicely), Brian’s back in the guest chair this week, with a word that looks innocent enough but is, I suspect, the gateway to a gloat about recent footballing matters. Let’s see what he has to say.

I was floating in my pool recently (note: if you have to inflate – it ain’t that great!) whilst floating some ideas to my pool thermometer companion (Sherman the pool shark) for a suitable word to use as my next contribution to Word of the Week. Not wishing to feel out of my depth now that the editor has a pool of guest writer material to dip into, I fathomed for a perfect wave of an idea… and then it hit me. I’d drifted into the metal pool ladder.

As I dipped my bruised ear into the cooling waters, it hit me (no, not the ladder again). I didn’t need to dive far below the surface of my consciousness for the perfect word; it was all around me. Note from the archives: I’m sure avid readers of WotW will remember our illustrious Editor’s acclaimed post on the word float back in November 2017, which not only swam richly over every etymological angle of the word, but tapped into the very essence of life itself. (Get on with it – Ed). It would be churlish for any aspiring writer to even consider floating the notion of dabbling in those waters again so, not wishing to create any ripples, I will refreshingly dive into the word ‘pool’.

To clarify, when I refer to the word ‘pool’, I don’t mean the term ‘wordpool’, although ‘wordpool’ is a fine example of when the word ‘pool’ can be combined with another word, in this case ‘word’, to form a compound word, ‘wordpool’, meaning a pool of words used as a shared resource. Not to be confused with ‘whirlpool’, which is more of a watery maelstrom. Trust me, you’d rather be staring into a wordpool.

Pool, from Old English ‘pol’, is a small body of water, or a still place in a moving river, which is kind of the polar opposite of the aforementioned whirlpool. While many a fishing pole would have been used to cast into the calm waters of a pool (along with an occasional errant golf club), whirlpool fishing is somewhat less common. We get our ‘pool’ or ‘puddle’ from Old German ‘pfuol’ or ‘pfuhl’ (I’ll wager they invented pffft too) and the Dutch ‘poel’, but the pole used for fishing in the pool actually derives from ‘pal’ in Old English and Old German, meaning a stake, post or – you guessed it – pole.

The term ‘polar opposite’, of course, pertains to the geographical poles in the Arctic and Antarctic and hails from Medieval Latin ‘polaris’, posing the age old question, if we have polar bears in the Arctic, why don’t we have polar penguins in Antarctica? (Or maybe we do… Answers in the comments below please).

Other than splishing, splashing, swimming and floating, we also love pools of information, resources and people for the purposes of sharing. Syndicates and consortia pool their resources, workers pool funds in dreams of winning the office pool and exhausted parents love it when it’s not their turn to drive in the carpool. This could be medically diagnosed as carpool tunnel syndrome, which is common in many parental gene pools. (I type from experience!)

Pool sharks (or sharps, or hustlers, or indeed sandbaggers, depending on where you play) are found more frequently in pool halls than in backyard pools, but did you know that those pool halls took their name from the 19th century betting pools that operated there, not the game that emerged as a sideshow? Men (exclusively men) would gather to bet on the horses and the hall owners stuck a few billiard tables in to keep them amused between races and punch-ups. Thus the game of pool evolved, taking its name from the halls in which it was played.

If you find yourself playing pool in Blackpool, it might help you to know that folks from that seaside resort are collectively known not only as Blackpudlians but also as Sandgrownians. So if you’re ever hustled by a local in a Blackpool pool hall, you can say you’ve been sandbagged by a Sandgrownian, which has so much potential for a Visit Blackpool bumper sticker, doesn’t it?

The UK boasts a decent number of town names ending in ‘pool’ and even one beginning in ‘pool’ – Poole. There’s Hartlepool, Pontypool, Ullapool, Welshpool, the aforementioned Blackpool and I’m sure I’m forgetting one? (Don’t do this, Brian – Ed) Erm – it’s a really big one too. It’ll come to me.

Unlike Bishop’s Itchington in Warwickshire, the origin of such place names requires little explanation, but it’s interesting to note that our US counterparts largely veered away from appending ‘pool’ to their city names, preferring the more dramatic aquatic features like springs, falls and rapids. Maybe this has something to do with the respective geographies of the countries, or perhaps the personality types of the individuals in charge of place naming?

Let’s not get into that debate or we’ll all find ourselves in hot water. We’re polarised enough, aren’t we?

At this point Brian started to lapse into wanton allusions to Liverpool FC, which, given that it’s the cricket season, seemed irrelevant, so I cut him off. But he did end with a nice little call to action, which I’ll leave in for the sake of closure.